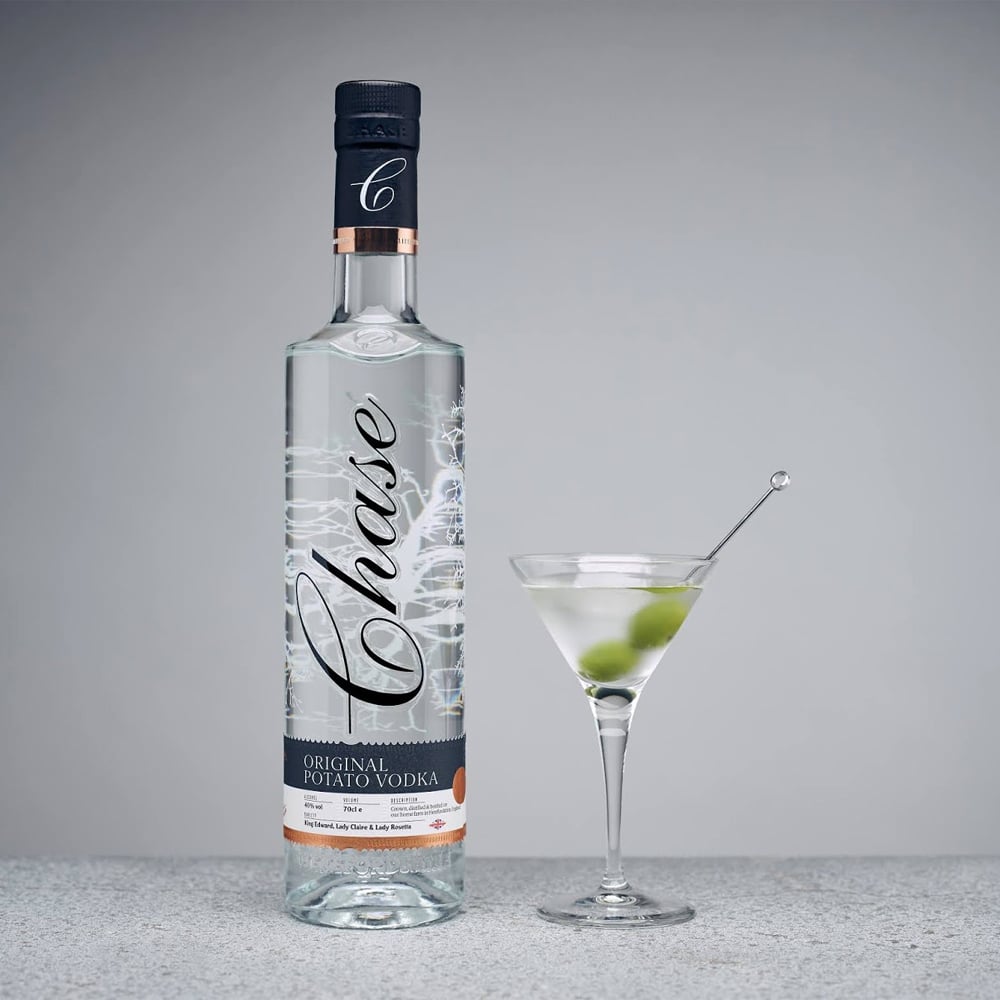 This guide will help give you an overview of what Chase has to offer.

Note: the prices are in US Dollars, and for the US market, if you are outside of the US, the prices may vary. We will, however, include links to the best place to buy your ideal bottle of Chase in your country.

How much is a bottle of Chase?

The most commonly bought bottle of Chase is the Chase Original Potato Vodka 750 ml and costs around $51.45.

What is the most expensive bottle of Absolut?

The most expensive bottle of Chase Vodka is the Chase Cognac Cask Aged Marmalade Vodka, a limited edition vodka bottle. It can be considered an upgraded version of Chase Marmalade Vodka. It costs around $135.38.

Now that you have the simples answer to the simples questions, below you’ll find the prices and sizes of the entire range of Chase Vodka, their sizes, prices, and later on a buyer’s guide.

Chase is considered a high-end vodka brand. Here is the list of 5 standard bottles of chase vodka, along with their prices.

This was the list of the top 5 Chase Vodka bottles. But one of them has managed to remain on the top and is considered the most common Chase vodka.

Chase Original Potato Vodka is the basic and simple vodka by the vodka brand. It is smooth, buttery, and creamy in texture due to the dominant ingredient. It is produced in a copper pot. It has slight hints of vanilla. It has a clean finish with some earthy notes. Also, the vodka bottle was awarded a gold medal in San Francisco World Spirits Competition. It is priced around $51.45-$54.15 for 750 ml.

Are you a coffee lover? If yes, then you will surely love the Chase Espresso Vodka by the vodka brand. It is a combination of chase vodka and Single Estate El Salvador Coffee. It is rich and creamy in texture. The cold-brewed coffee is sweetened and then infused with Madagascan vanilla pods. This makes it a little bit complex but helps to gain a high-level richness. It has a vanilla hint and rich milk chocolate. There are dark roasted coffee aromas as well. It is perfect for coffee lovers.

Chase has a Chase Aged Marmalade Vodka on its vodka shelf, but there is something different about Cognac Cask Aged Marmalade. It has Seville Orange Marmalade and orange peels. The vodka has a long finish with cognac raisin notes. It has a tangy taste coming from orange peels and sweet from the grapes. It is considered one of the most expensive vodkas from Chase.

Chase Horseradish Vodka is a limited edition vodka exclusively made for the cocktail bar of a renowned hotel. It was made from Chase Potato Vodka and was completely handmade.

Chase is considered an experimental brand when it comes to its limited-edition bottles. But, even the regular vodka bottles by the brand are unique and elegant. Here are different Chase Vodka bottles. So, keep reading, and you will surely find vodka for your next party.

Chase Aged Marmalade Vodka is all set to give your taste buds a tangy ride. The vodka is distilled with orange peels from Seville and Valencia. Then, for around six months, it is aged in oak barrels. As a result, one can taste sweet, fresh, tangy, and bitter flavors that are perfectly balanced. The finish is quite long and gives a sense of tangy peels.

As the name suggests, it has a floral touch. But, just like flowers, the taste is also delicate. The infusion of fresh elderflower and chase vodka is unique. It has citrus tones with a tart flavor. Also, it is best with champagne.

Everything is smoky with Chase Oak Smoked Vodka. First of all, for five days, the spring water is smoked with oak. Then, it is blended with chase vodka to get the delicate smoky finish. There are layers of different flavors and textures. It has pepper notes and bitterness with a delicate smoky effect.

Chase Vodka is a single estate potato vodka that was introduced in the year 2008. It is made in Herefordshire, England, UK. William Chase introduced it, and it is quite clear from where it got its name. In the year 2010, the vodka brand was voted as the best in the world, revealing the early success of the brand. The brand also produced Gin.

The history behind Chase Vodka

The vodka brand Chase is considered UK’S first-ever single estate distillery. The brand has a long history and is considered an outcome of a family business. So, the family was looking to start some business with their potatoes, and that is how they came up with the brand Tyrrells. To grow even further and utilize the potatoes, the vodka brand Chase was born. The vodka brand managed to gain popularity and early success. As per a few reports, in 2016, the brand sold 10,000 bottles per week.

Why is Chase Vodka so popular?

Chase is considered a vodka brand that has built an empire from potatoes. The popularity of the brand is quite high, and people are crazy about their vodka. There are many reasons for the popularity. It can be said that the brand gained the name quickly and managed to grab attention because it started on a small scale rather than a multi-national company. It was shocking and great that a small family business managed to compete with the top vodka brands and was voted the best vodka in the world. So, the brand’s uniqueness, awards, and history have a big role in pushing the brand into the limelight.

How to best drink Chase Vodka?

There is no hard and fast rule to follow a specific way of drinking vodka. But here are some popular ways to have Chase Vodka:

Just gulp down the vodka neat without mixing anything, which is considered a quick way to enjoy vodka. However, if you wish to enjoy the raw texture and the earthy notes of Chase Vodka, have a shots session.

Drop your vodka over a few cubes, and you are good to go. This will cool your drink and help you to enjoy the original flavor.

Suppose you are a person who is quite experimental with the drinks, then go for cocktails. There are many cocktails that you can try with chase vodka. Just grab Chase Original Potato vodka and mix it with dry vermouth. Stir and strain in a chilled martini glass, and your Vodka Martini is ready.

English mule is another option on the cocktail shelf. Take Chase Original Potato Vodka and add fresh lemon to it. Top it up with a ginger beer in a highball glass.

If you wish to play safe, mix your favorite Chase Vodka in your lemonade. It is the safest road when you are confused about the flavors.