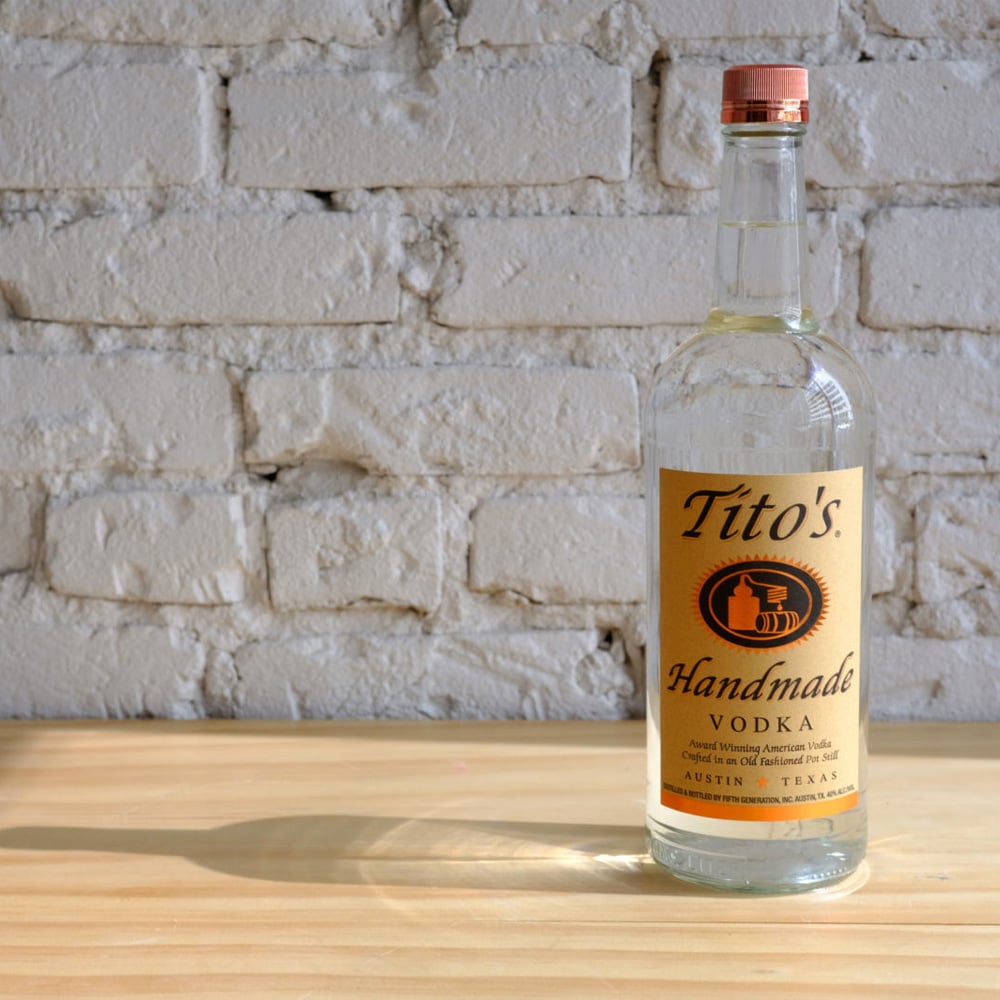 This guide will help give you an overview of what Tito’s has to offer.

Note: the prices are in US Dollars, and for the US market, if you are outside of the US, the prices may vary. However, we will include links to the best place to buy your ideal bottle of Tito’s in your country.

How much is a bottle of Tito’s?

The most commonly bought bottle of Tito’s is the Tito’s Handmade Vodka 750 ml and costs $20.

What is the most expensive bottle of Tito’s?

The most expensive bottle of Tito’s Vodka is Tito’s Handmade Vodka 1.75ltr. It costs you $37.

Now that you have the simplest answers to the simplest questions, below you’ll find the prices and sizes of the entire range of Tito’s Vodka, their sizes, prices, and later on, a buyer’s guide.

Tito’s Vodka comes at various ranges and prices. The following is the list of the standard Tito’s Vodka bottles and their prices.

Tito’s Vodka is distilled using pot stills instead of column stills to make clean and smooth-tasting Vodka. Locally-sourced corn is used for the distillation process to make a spirit with a sweet and salty tone. The corn mash is batch distilled in old-fashioned pot stills and filtered to create naturally gluten-free Vodka.

It is distilled six times in a pot still and filtered to reach the perfect consistency and quality. Each batch is taste-tested for its perfection. The intricate, labor-intensive process creates the perfect hand-crafted Vodka.

Though Tito’s Vodka is one of the biggest brands in the Vodka industry, it is not that expensive. Compared to other brands made in the United States, you get what you pay for good quality Vodka at Tito’s.

Tito’s Handmade Vodka is a famous American brand that Tito Beveridge started in 1995. The company is one of the most successful distilleries operating in Austin, Texas. It is a billion-dollar company that uses pot still to distill Vodka from corn instead of grapes or wheat. The brand was awarded a double gold medal at the San Francisco World Spirits Competition and won plenty of stars in the spirit journal in the 2007 edition. In addition, Tito’s Vodka became one of the inflight beverages on United airlines in 2013.

The Mockingbird Distillery, covering 26 acres in Austin, is the oldest legal distillery in Texas. It has become the best-selling vodka spirit in the United States and Canada. As a result, Tito Beveridge is one of the Forbes richest people in the world. The distillery pumps out millions of vodkas bottles a month, but the production and distillation process remains the same.

The History Behind Tito’s Vodka

Born in San Antonio, Tito Beveridge started distilling Vodka as a hobby while attending the University of Texas at Austin. Being a geophysics graduate, he got into the oil and gas business and eventually moved to Austin. In 1992, he started making flavored Vodka as a hobby and gifted it to friends. He was taken aback when one stranger remembered him to be the vodka guy. He decided to take his hobby of making Vodka seriously and approached many liquor shops for business.

When the liquor owners told him that they would be interested if he made it so smooth that you could drink it straight, he would have a chance to be in the Vodka business. This inspired Tito to make a distillery and start producing smooth and crystal-clear spirits.

In those days, there weren’t any recipes or processes for making Vodka. So he bought the best-selling ones and tried to replicate the best-tasting one by comparing it with his trials. When he found the formula for making the best Vodka that matched the taste of the existing ones, he decided to run the distillery business legally in Texas.

He was a revolutionary who legally built a one-man distillation unit in Texas and built a production still in a one-room shack through credit card. Tito spent years of hard work building a brand and convincing local liquor stores and bars on buying his product. Finally, Tito hand-bottled the Vodka and designed the brand’s label by himself.

Tito obtained the first legal permit to his Texas distillery in 1995. Tito’s Handmade Vodka became one of the most successful distilleries and the cleanest spirits in the United States. The fifth generation in Austin, Texas distills and bottles the handmade Vodka in the same distillery started by Tito Beveridge.

Why is Tito’s Vodka So Popular?

Tito’s Handmade Vodka is America’s original craft Vodka, which came into the business in 1995 and is still a successful Vodka brand in the country. The clear, smooth-tasting Vodka distilled from corn using old-fashioned pot stills makes it popular among the older and younger generation. In addition, it is naturally gluten-free as it is made from corn without adding any malt mash.

It is still produced in Austin, Texas oldest legal distillery. The quality remains to be the same because it is batch distilled, and every batch is taste-tested for quality and taste. It is one of the best-selling liquors in the world, surpassing many favorite brands in the country. And most importantly, it is very affordable.

How Best to Drink Tito’s Vodka?

Tito Vodka is one of the smoothest Vodkas distilled from corn in the United States. Here are the various ways you can enjoy this handcrafted Vodka,

Tito’s Handmade Vodka is the perfect drink to enjoy without mixing or ice cubes at room temperature. Instead, pour a glass of Tito’s Vodka and sip it gently to enjoy it to the fullest.

Enjoy Tito’s Vodka chilled. Pour the beverage into the glass with ice cubes. Add a slice of lemon to appreciate the flavors.

Tito’s Vodka is the perfect base in any cocktail, including martinis and Vodka tonics. The sweet, salty, and buttery tone of the Vodka goes well with fruit juices to make classic cocktails. Try mixing Tito’s Vodka with cranberry juice, orange juice, peach juice, grapefruit juice, sparkling wine, and sparkling water to make punch and floral cocktails. It also mixes well with soda or Ginger beer to make popular cocktails such as Moscow mule, cosmopolitan and dirty Martini.

It is the perfect drink to order at bars or restaurants to pair with your delicious entrees and fried foods. Pour some Tito’s Vodka in a glass and drink it in one shot. You can feel the smoothest Vodka down your throat.

Tito’s Vodka makes an excellent base for making plenty of infused drinks. You can try making it with peaches and dried cherries. First, refrigerate Tito’s Vodka with sliced peaches or dried cherries in the refrigerator for 3 to 4 days. Then, serve it chilled at your dinner party to impress your guests.

Take a sip of Tito’s Vodka, and you may get inspired to turn a hobby into a billion-dollar business just like Tito Beveridge!