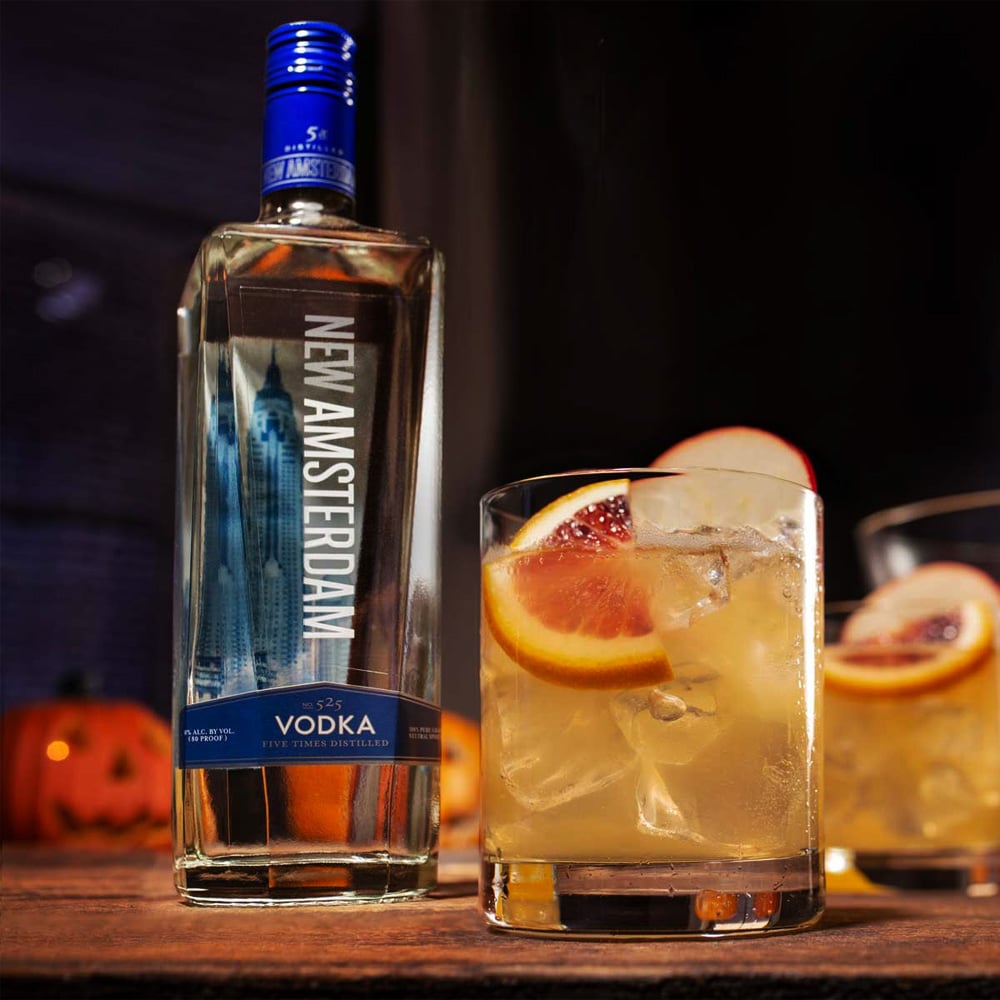 This guide will help give you an overview of what New Amsterdam has to offer.

Note: the prices are in US Dollars, and for the US market, if you are outside of the US, the prices may vary. We will, however, include links to the best place to buy your ideal bottle of New Amsterdam in your country.

How much is a bottle of New Amsterdam?

What is the most expensive bottle of New Amsterdam?

Now that you have the simples answer to the simples questions, below you’ll find the prices and sizes of the entire range of New Amsterdam Vodka, their sizes, prices, and later on a buyer’s guide.

New Amsterdam Original Vodka is the top essential vodka bottle of the brand. It is crisp, clean, and smooth in texture. It is distilled five times and filtered thrice by the side and is perfect for making Moscow Mules.

New Amsterdam Peach flavor is widely loved and is considered a winning flavor amongst all other flavors. It has an orange flavor with a vanilla edge. The pleasant fruit taste reveals the natural fruits and flavors in the drink. Just like other New Amsterdam Vodkas, this also has a clean and smooth finish.

New Amsterdam and Barstool Sports teamed up together and launched the limited edition bottles. Just as other vodkas, the taste is said to be ultra-smooth and perfect for summers. It is also said to be the official drink of summer.

As the name suggests, New Amsterdam Limited Ed Vegas Golden Knights NHL is for a National Hockey League season. However, it has always tried sports marketing, and its focus seemed to be hockey.

Currently, New Amsterdam is The Official Vodka of NHL. It is available in 750 ml.

New Amsterdam has managed to keep every basic flavor under its umbrella. Though the flavors are primary, the list is long. Here are the different types of bottles of New Amsterdam Vodka. So, just keep reading, and we are sure that you will find your favorite flavor.

As the name suggests, it is 100 proof Vodka. It is made from corns which are of the finest and top-notch quality. The texture is clean and smooth. The taste is sweet with light citrus notes. The price of New Amsterdam 100 Proof Vodka 750 ml is $9.97-$13.99.

If you are a fan of berries, then New Amsterdam Red Berry Flavored Vodka will become your all-time favorite. This flavor has different berries which are blended to give you a merry time! There are raspberries, strawberries, blackberries, and Boysenberries. The texture is silky, smooth, and clean. Also, the flavor has a slight lime zest touch. To add on, this flavored vodka also has brown spice with a hint of vanilla. It is ranged between $9.97 and $13.99 (750 ml).

Mango is considered one of the favorite and most loved fruits. So, the fruit knows how to make its space amongst the other flavors. New Amsterdam Mango Flavored Vodka is juicy, fresh, and refreshing. It has papaya and passion fruit which acts as a cherry on the top. The texture is crisp with a refreshing finish. The price of the mango-flavored vodka 750 ml is between $9.97 and $13.99.

Lemon is a complex flavor, and usually, one does not get the desired results. But in New Amsterdam Lemon Flavored Vodka, the taste of lemon is perfectly balanced and manages to give a crisp and sweet touch to the taste buds. The cost of the New Amsterdam Lemon flavor 750 ml is $9.97-$13.99.

If you like you drink creamy or if you are a Pina Colada fan, then New Amsterdam Coconut Flavored Vodka is a perfect drink for you. There are layers of creamy, sweet, and roasted coconut. Apart from coconut, the vodka flavor also includes pineapple, mango, banana, and papaya. The price is New Amsterdam Coconut 750 ml is $9.97-$13.99.

New Amsterdam Orange flavored Vodka is here for all the people who crave a tangy touch. The flavored vodka has flavors of tangerine, clementine, and ripe orange fruit. It also has a slight taste of orange peel. However, the price range lies approximately between $9.97 and$13.99 (750 ml).

New Amsterdam is a smooth vodka brand that is five times distilled and filtered thrice. It is a vodka and gin brand by E.and J. Gallo. The vodka is made from grains. Though the brand started making gin in 2008 and vodka came in 2011, Vodka managed to dominate. It became the world’s fastest-growing spirit. Since then, it has worked to make the space in the industry. Their New Amsterdam 100 Proof Vodka is made from corn.

The history behind New Amsterdam Vodka

New Amsterdam introduced the world with its vodkas in 2011. From 2008 to 2011, they kept working on their gin, but vodka managed to bring the brand into the limelight. The brand then knew no failure and still managed to rule the industry.

The sales hit the 1-million benchmark in 2016. Thus, the brand got reasons to flaunt the title of fastest-growing vodka brand. In addition, it won a gold medal at LA International Spirits Competition 2014 edition.

The Vodka brand is the perfect example that success requires perfection.

Why is New Amsterdam Vodka so popular?

New Amsterdam is known for its marketing. For example, the vodka brand manages to market and increase its vodka sales by targeting sports, which is a clever marketing technique. Also, though the brand is not too old, they have indeed managed to make their space with perfection in the products.

Drinking vodka straight is always an option. However, if you like it raw and basic, just give it a try without a second thought. Also, New Amsterdam is known for its smooth texture and can be taken quickly without mixing anything.

If you are confused about the shots, just use a couple of ice, and you are good to go. However, as the vodka is smooth, it will be wise to try it on the rocks.

Pina Colada usually contains rum in it, but with New Amsterdam, you are getting a chance to try it with vodka. Just add New Amsterdam pineapple or coconut-flavored vodka, which will make your Pina Colada creamy and tempting.

If you want to try your hands-on cocktail making, then try the peach punch cocktail. Just New Amsterdam peach flavored vodka with elderflower liqueur, lime juice, and orange juice. Garnish it with a peach or lemon.

If you wish your cocktail to be basic, then try Moscow mule with New Amsterdam Original Vodka as basic is the best.