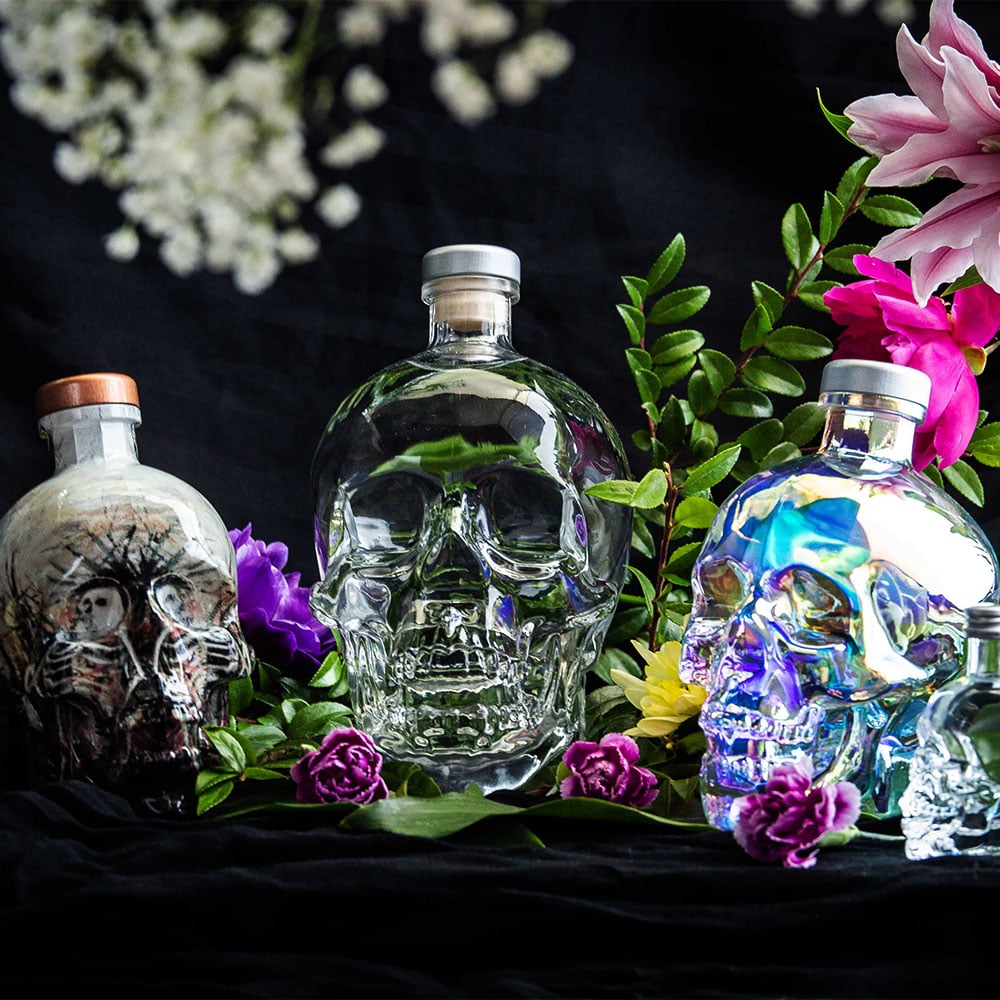 This guide will help give you an overview of what Crystal Head has to offer.

Note: the prices are in US Dollars, and for the US market, if you are outside of the US, the prices may vary. We will, however, include links to the best place to buy your ideal bottle of Crystal Head in your country.

How much is a bottle of Crystal Head?

What is the most expensive bottle of Crystal Head?

The most expensive bottle of Absolut Vodka is Crystal Head Rolling Stones. It is a limited edition worth $130.This exclusive Vodka was created to commemorate the 50th anniversary of the Greatest Rock ‘n’ Roll band, Rolling Stones.

Now that you have the simplest answer to the simplest questions, below you’ll find the prices and sizes of the entire range of Crystal Head Vodka, their sizes, prices, and later on a buyer’s guide.

Crystal Vodka comes at various ranges and prices. The following is the list of the top 3 standard Crystal Head Vodka bottles and their prices.

Crystal Head Vodka Original has become widely popular among its loyal customers for its unique aroma and taste.

Crystal Head Vodka original is a clean, colorless, and odorless spirit made from sweet Canadian corn. The smooth and refined taste comes from its meticulous 4-times distillation process using pristine Canadian waters. This drink is filtered seven times, especially passing through Herkimer diamonds thrice for a creamy finish. It has a hint of vanilla to give sweetness and aroma to the drink. It’s worth $50.

Crystal Head has introduced only three limited vodka bottles for its audiences. As they take a massive effort in creating special edition Vodkas, the following is the list of Crystal Head Vodka Limited Edition bottles and their prices:

Crystal Head Vodka John Alexander is a limited-edition bottle launched in 2018. Each bottle is handmade as a keepsake-worthy of art. The design of the bottle is inspired by the iconic paintings of the world-renowned fine artist.

The company launched the John Alexander Limited Edition Vodka bottle for its 10th anniversary. It took three years to create 25,000 bottles of this Vodka. It’s available in 750 ml and costs $120.

Crystal Head launched its iconic creative Vodka to celebrate the 50th anniversary of Rolling Stones, one of the top-class Rock ‘n’ Roll bands in the world. They created a memorable gift set featuring the iconic crystal Head Vodka Bottle engraved with the tongue and lip logo of the Rolling stones band on the decanter top.The bottle had a sticker featuring the 50th-anniversary logo which was sold first in the year 2013.

People loved this limited-edition Vodka bottle as a Father’s Day gift or even a heartfelt Christmas present. Musical fans and vodka lovers went berserk over this limited-edition bottle to cherish it as a collectible. Crystal Head was awarded the Gold Medalist for Excellent Taste by Russia.

As a token of their love and support to the LGBTQ+ community, Crystal Head introduced “Pride”, a limited-edition Vodka bottle. It’s the brand’s way of celebrating diversity and equality among humanity by portraying incredible rainbow colors on its iconic bottle. The vodka is made from corn and infused with the sweetness of Vanilla for a clean and smooth taste.

The company takes pride in forging global partnerships supporting the gay community and educating people with profits. The bottle was launched in 2021 and is available in only select countries. It’s worth $50 for 750ml.

Different Types of Bottles and Prices of Crystal Head Vodka

Crystal Vodka has a list of selected premium-vodka flavorsfor creative spirits. If you love drinking top-class vodkas, check out this list of Crystal Head Vodkas to pick your favorite.

Crystal Head Vodka Original is one of the premium drinks in the world-renowned for its highest quality, aroma, and taste. It’s made from the sweetest Canadian corn which is distilled four times using the coolest spring waters from the aquifer in Newfoundland. The pure grain spirit goes through a seven-stage distillation process to become the smoothest and tastiest vodka. Crystal Head gives a touch of luxury to its original vodka by passing it through Herkimer diamonds; rarest crystals found on the earth.

Crystal Head launched “Aurora”, as a tribute to the mysterious display of lights in the aerial skies of the Polar regions. Crystal Head Vodka Aurora differs from the original one in its blend and origin. They create this special Vodka using high-quality English wheat which gets distilled five times using the Canadian pristine waters. It is filtered seven times and enhanced with spices such as anise to give a rich peppery taste to the drink. The bottle features the aurora borealis with a metalized finish, that portrays the beauty and mystical effects of the mind-blowing northern lights.

Crystal Head Vodka Onyx symbolizes the powerful intuition and protective properties of this wonderful warrior crystal. It is crafted from the Blue Weber agave, sourced from Mexican Farm and distilled using pure Canadian waters. The pure spirit is infused with green grass, citrus, and white pepper flavors. The bottle has a luxurious finish with a debossed cap matching the black color. The Crystal Head Vodka Onyx is additive-free vodka as the onyx crystals are devoid of impurities.

Crystal Head is one of the ultra-class vodka brands in the world. It’s the creative brainchild of the Hollywood actor, Dan Aykroyd, and the famous artist, John Alexander. The brand was incepted in the year 2008 to curate the best and purest vodka. Crystal Head was made for the creative spirits by designing a quirky packaging, skull-shaped glass bottle, made in the Bruni Glass Factory in Milan.

The History behind Crystal Head Vodka

Crystal Head’s vision was to create the purest spirits with great taste and quality. The founders were inspired to design quartz glass heads based on the 13 Crystal Skulls; Mayan mythology of intuition and psychic abilities. Their one-of-a-kind innovative vodka packaging symbolizes the mystical powers of skulls dating back centuries. The brand focussed on providing the purest spirits in contemporary bottles with an artistic touch to their every edition.

Why is Crystal Head Vodka So Popular?

Spruce up your parties by serving world-class vodka from an artistically-designed skull-shaped bottle. You can pretty much enjoy this smooth and flavor-rich vodka in several ways such as,

Treat the finest Vodka with great respect by sipping it straight chilled with ice. What’s more refreshing than enjoying a glass of Crystal Head Vodka on the rocks. The mild sweetness from the vanilla and delicate aftertaste gives pure joy.

The best part of Crystal Head Vodka is that it’s clean, additive-free with a natural flavor that blends well with any fruit juice or sparkling water. You can make delicious cocktails using this vodka as it makes a great neutral base. Try this with soda to make Vodka tonics or orange juice for vibrant drinks.

The classic Vodka shots work best with Crystal Head. Grab a bottle of your favorite Crystal Head Vodka and chill in the freezer. Pour it in a shot glass and knock it off like a pro.

Crystal Head Vodkas are designed for neat fanatics who love sipping the purest spirits at room temperature. Its impeccable filtration process gives this drink a naturally smooth and creamy taste.

Let the mystical bottles of Crystal Head Vodka bring healing and positive energies into your life!