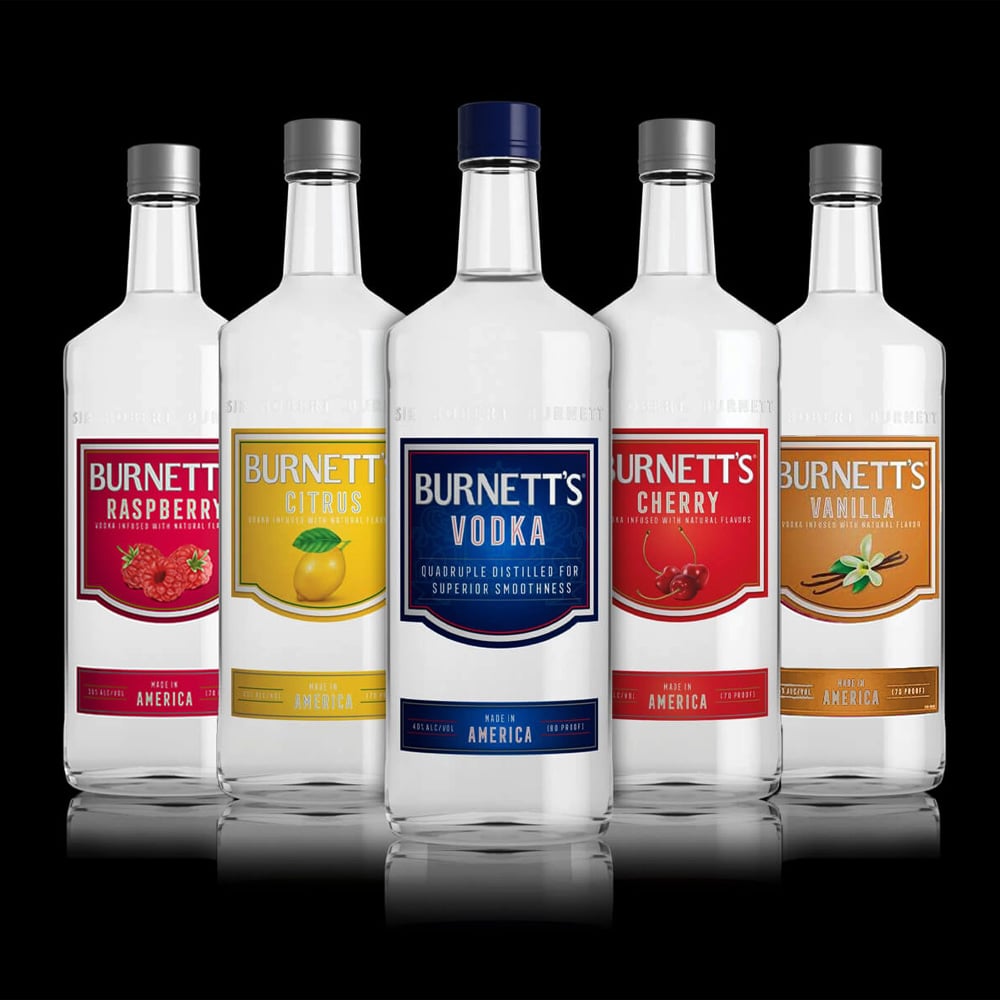 This guide will help give you an overview of what Burnett’s has to offer.

Note: the prices are in US Dollars, and for the US market, if you are outside of the US, the prices may vary, we will, however, include links to the best place to buy your ideal bottle of Burnett’s in your country.

How much is a bottle of Burnett’s?

What is the most expensive bottle of Burnett’s?

The most expensive bottle of Burnett’s Vodka is Burnett’s Summer Package Collection. It is a limited-edition drink worth $15.99 for 1.75ltr. This exclusive drink encourages consumers to share their summer experiences with Burnett’s on social media.

Now that you have the simplest answers to the simplest questions, below you’ll find the prices and sizes of the entire range of Burnett’s Vodka, their sizes, prices, and later on, a buyer’s guide.

Burnett’s Vodka has around 37 flavored vodkas, which vary in size and price range. Here are the top 3 Burnett’s vodka bottles and their prices,

Burnett’s Vodka Original is one of the purest vodkas on the market. The quadruple distillation process and the thrice filtration through charcoal give the drink a natural smoothness and finish. It is available in 80 and 100 proof at lower prices of $6.99-15.99. It is one of the best bases for making delicious cocktails.

Burnett’s Vodka citrus has a balanced, clean, and zesty flavor. Made with refreshing lemons and lime zest, the drink has 40% ABV. It has a natural citrus flavoring and tangy taste. It’s worth between $6.99-$9.99.

The smoothness of superior-quality Burnett’s Original Vodka infused with creamy scents of vanilla creates a natural Burnett’s vanilla-flavored Vodka. It has a smooth vanilla bean fragrance and a creamy finish. It’s worth between $6.99-$9.99.

Burnett’s Vodka is made in America, and the brand exhibits its loyalty to the country by introducing a Summer Series collection every June. Here is the list of Burnett’s Limited-Edition bottles and their prices (750ml)

This is a symbol of patriotism which was first created in the year 2016. The bottle is designed using the American National Flag’s red, white, and blue colors to celebrate the American spirit. The stripes and splats of white paint design on the bottle attract plenty of customers. It has 40% ABV and 80 proof. The Burnett’s Vodka USA party limited edition bottle is available in 750ml cases at $15.99.

Each bottle has red, blue, and white graphics displaying sunglasses, cassettes, party cups, fireworks, and flip flops. In addition, it comes with stickers helping customers personalize their bottles and share their memories with Burnett’s Vodka on social media. Each bottle is available in 1.75ltr packaging at the price of $15.99.

Burnett’s Vodka comes in an array of delicious and unique flavors categorized into three, namely, fruit, sweet and spiced. Here are a few popular ones to help you choose the best out of the lot,

The freshly peeled scent of oranges in this Burnett’s orange-flavored Vodka gives a different level of experience. It has a fruity essence and citrusy aftertaste.

Burnett’s Vodka Mango is one of the exotic flavors available in this brand. It works great as a tropical drink to enjoy at the beach.

A mix of natural fruit flavors gives this Vodka a superior fruity taste. In addition, Burnett’s vodka fruit punch has a bright color and sweet taste.

Burnett’s Vodka candy cane is one of the top vodkas for the holiday season. It goes great with coffee, hot chocolate, or marshmallow cocktails.

Burnett’s Vodka Sweet tea is the perfect drink made for a summer evening. It is a truly unique combination that tastes great with a dash of lemon and ice.

The lusciousness of whipped cream combined with the smoothness of Burnett’s Vodka gives this drink a sweet and creamy finish. It tastes like homemade whipping cream and goes great with soda or fruit juices.

A favorite tropical drink combined with the smoothest Vodka to create this amazing Burnett’s coconut flavored Vodka. The sweetness of coconut with a fruity aroma tastes best as summer cocktails.

The spiciness of hot cinnamon, along with the smoothness of Burnett’s Vodka, packs a punch to celebrate the cozy winter nights. It’s a great add-on to a warm and spicy cocktail.

Burnett’s Vodka is one of the popular vodka brands in the world. Its establishment is in the United States. Heaven and Hill Brands own the company, and the brand has expanded its horizons globally since 2000. It is one of the largest selling vodka companies in the country.

The history behind Burnett’s Vodka

Burnett’s Vodka has a strong portfolio with over 35+ vodka drinks currently sold across many countries worldwide. The bottle has the logo with Sir Robert Burnett’s name encapsulated in all of them. It was started 25 years ago to supply the smoothest Vodka at reasonable prices using the charcoal filtration process.

Why is Burnett’s Vodka So Popular?

It’s cheap and has a super-smooth finish. Burnett’s Vodka brand sells 3 million bottles every year as the 4th popular Vodka brand in the United States. It is one of the few companies that boasts over 35+ naturally flavored vodka drinks. Every flavor blends wonderfully with a variety of mixers to make creative and refreshing cocktails. In addition, the plastic bottle packaging makes it super portable, and the contents are low in calories.

How to Best Drink Burnett’s Vodka?

If you love exploring different flavors of Vodka, you must try out Burnett’s flavored ones. Here are a few ways to enjoy the delicious Burnett’s Vodkas,

Look Like a champ by taking a shot of Burnett’s Vodka. Drinking the ultra-smooth Burnett vodka straight is one of the best pleasures to experience in life.

Burnett’s Vodka tastes great, even with a few cubes of ice. You can pour Burnett’s Vodka original or flavored one in a glass with ice cubes or chill the bottle for a few hours to enjoy the taste to the fullest.

Who doesn’t love sneaking in some alcohol during summer by enjoying popsicles on a hot summer morning? Vodka popsicles are a thing! Try making colorful and tasty popsicles with Burnett’s flavored Vodka such as Burnett’s vodka orange, watermelon, blue raspberry, grape, and strawberry.

Burnett’s flavored Vodka such as fruit punch, mango, pineapple, peach, pear, and grapefruits taste amazing when mixed with sparkling water or rocks. You can make refreshing lemonades with these drinks.

Burnett’s has a special collection of sweet-flavored vodkas like cherry cola, pink lemonade, sugar cookie, and candy cane, slightly on the sweeter side. If you love making sweeter cocktails, these are the perfect drinks to enjoy.

The unique flavors of Burnett’s Vodka, such as coconut, vanilla, and hot cinnamon, are on the spicier side, which are absolute favorites of teenagers. They taste great with a variety of mixers.

Variety is the spice of life, and Burnett’s never disappoints!