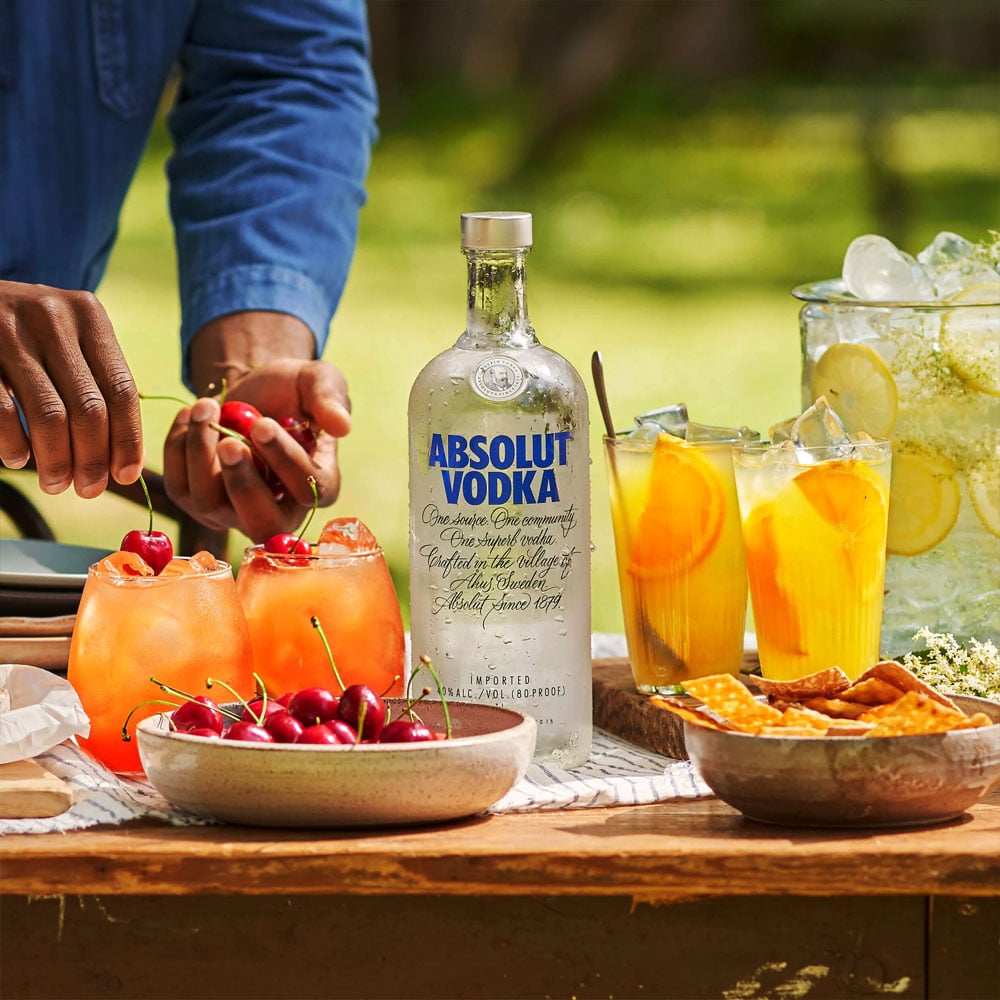 This guide will help give you an overview of what Absolute has to offer.

Note: the prices are in US Dollars, and for the US market, if you are outside of the US, the prices may vary. We will, however, include links to the best place to buy your ideal bottle of Absolut in your country.

How much is a bottle of Absolut?

The most commonly bought bottle of Absolut is the Absolut Original Vodka 750 ml and costs $29.

What is the most expensive bottle of Absolut?

Now that you have the simples answer to the simples questions, below you’ll find the prices and sizes of the entire range of Absolute Vodka, their sizes, prices, and later on a buyer’s guide.

Absolut Vodka comes at various ranges and prices. The following is the list of the top 5 standard Absolut Vodka bottles and their prices.

Amongst these, there are few Absolut Vodkas that have managed to win the hearts of many. The following includes some top Absolut Vodkas and their prices (750 ml):

Absolut Raspberri vodka is one of the best Absolut vodka flavors. It represents the Swedish origin of raspberries and is made with the wild raspberries found on the hill sites of Sweden. It contains no added sugar and only fresh and natural raspberries with the winter wheat base. This is worth between $13.99 – $20.99.

Absolut vodka original is a smooth drink that has no flavor or Aroma. However, it is one of the premium vodkas with noticeable wheat grain. You can consume Absolut’s original vodka in various manners and is worth between $13.99 – $20.99.

Absolut No Label is an exclusive bottle with no labels and logos. This is to embrace the value and support the LGBTQ+ community. This naked bottle represents the beauty within yourself without worrying about what’s outside. Absolut No Label was available in  700 ml, 750 ml, and 1l.

Absolut Originality is just the more innovative version of the original Absolut vodka. It has a transparent background and has a tricky infusion happening when you pour it in a glass. Absolut Originality was available in 700 ml, 750 ml, and 1l.

Absolut Oak is an exclusive limited edition made with steeped vodka and cask-aging in American, French, and Swedish oak barrels. It has a rich taste and character as well, which makes it different than other limited editions. Absolut Oak was available in 375 ml, 750 ml, and 1 l.

Absolut Vodka has a long list of different flavors, and we are eager to tell you more about them. So keep reading to find your favorite flavor:

This is a super easy and tasty vodka mix made with handpicked raspberries. It is an excellent base for summertime cocktails by the pool.

Absolut 100 is an intense vodka with 50% ABV. It has a rich flavor and comes in an elegant bottle.

It is a luxury vodka that is rich and smooth in texture as well as flavor. It is best served on rocks. It is an elegant drink for super elegant people.

It is the one for those who love stirred drinks mixed with great flavors. It has a unique character of its own and is widely loved by party people. This Lime flavored vodka is an ultimate choice in a nightclub.

It is a lemon-flavored vodka that is very smooth and has become one of the best-selling vodkas by Absolut to date.

This is a vanilla-flavored vodka that pretty much tastes like perfectly baked cookies. If anyone likes (love?) sweets, Absolut Vanilla is the best choice for them.

This is the first vodka launched in 1986. It is a spicy, pepper-flavored vodka that more or less contains the same ingredients as Bloody Mary’s.

This is an apple-flavored vodka that tastes like ginger and apples. It goes excellent with drink mixes of various kinds.

Absolut Juice Strawberry is made with real strawberry juice and Absolut Original vodka. It tastes great and gets better with every sip.

Absolut Juice Apple is another flavor made with real apple juice and Absolut Original vodka. It celebrates the Swedish seasons and is made with the perfect ripe apples.

We end the list by introducing the original Absolut Vodka that holds a creative and bold character. It is the perfect base ingredient for any cocktail.

Absolut vodka is a South Sweden brand introduced in 1879. Ever since then, Absolut vodka has become one of the largest vodka brands in the world. The manufacturer of this company is The Absolut Company AB, run by Pernofld Richard.

Absolut vodka is a unique brand with a wide range of over 60 plus flavors and limited editions.

The history behind Absolut Vodka

Absolut vodka is known as one of the purest vodka available in the current market. It is rich in taste, contains no additional sugar, and uses natural flavors. It has become one of the premium choices for cocktail parties and nightlife culture. Ever since its first introduction, Absolut vodka has surprised its loyal customers with tons of different varieties and flavors.

The original vodka is made from authentic winter wheat, plus it contains at least 60% of sterling water. Absolut vodka is a sophisticated choice when you are looking for something bigger than life.

Why is Absolut Vodka so popular?

Absolut Vodka has been a popular brand ever since its first release. There was not one time this brand has not failed to surprise its customers with its creativity and dedication to make the world a better place, and Absolut Vodka to be the best vodka brand. Thanks to its numerous flavors, Absolut has somewhat become the heart of the nightlife scene.

How to best drink Absolut Vodka?

There are uncountable ways you can enjoy vodka. However, we have listed the best ways to drink and enjoy Absolut vodka.

If you are at a music club with your friends, the best way to enjoy vodka is to take shots.

Orange juice and vodka are some of the best-mixed drinks to enjoy. It is refreshing and gives you the right taste of both vodka and tangy orange juice. You can also add other ingredients like tonic water, mango, or pineapple.

This is perhaps the best way to enjoy vodka. All you need to do is pour fine vodka into a glass with some ice.

Lastly, have your Vodka your way!