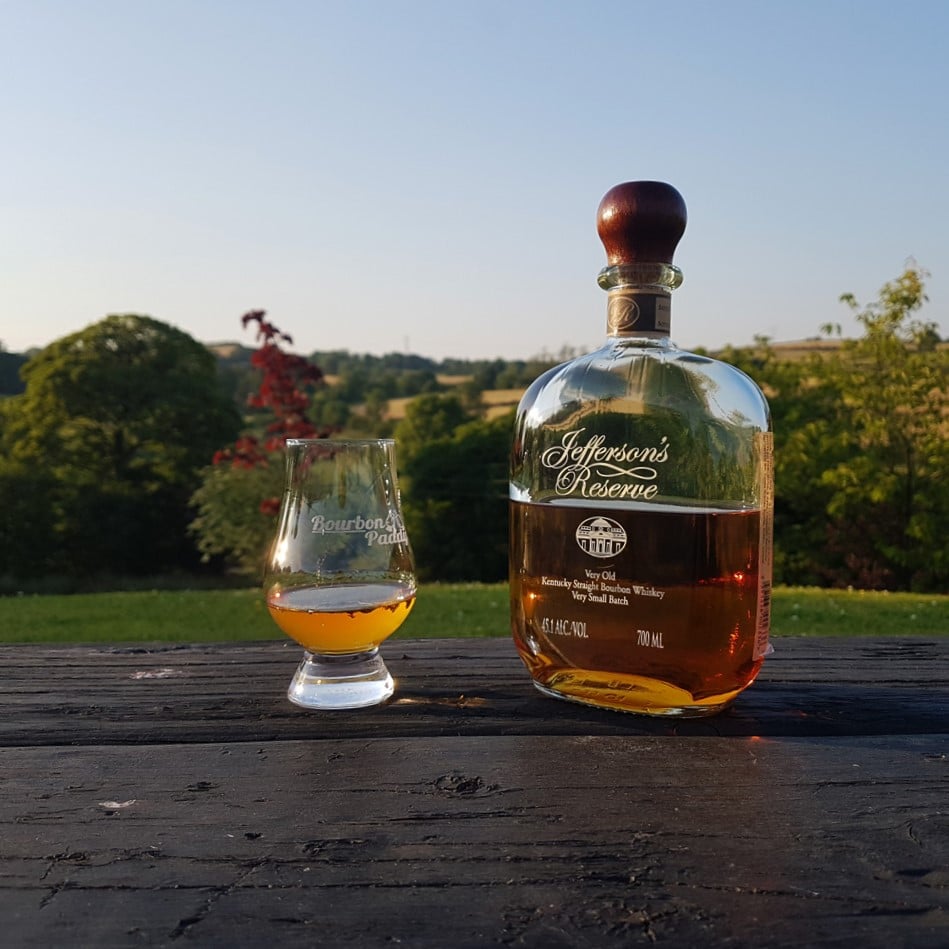 This guide will help give you an overview of what Jefferson’s Reserve Bourbon has to offer.

Note: the prices are in US Dollars, and for the US market, if you are outside of the US, the prices may vary, we will, however, include links to the best place to buy your ideal bottle of Jefferson’s Reserve Bourbon in your country.

How much is a bottle of Jefferson’s Reserve Bourbon?

What is the most expensive bottle of Jefferson’s Reserve Bourbon?

Now that you have the simplest answers to the simplest questions, below you’ll find the prices and sizes of the entire range of Jefferson’s Reserve Bourbon, their sizes, prices, and later on, a buyer’s guide.

Here is the list of Jefferson’s Reserve Bourbon bottles and prices.

Among these Jefferson’s Reserve Bourbon bottles, the following is the most popular one,

Jefferson’s Very Small Batch Bourbon is a blend of four different bourbons of different mash bills and ages. The blend is hand-selected, which has a consistent quality that gives a unique flavor and texture to the smooth bourbon whiskey. This is an excellent everyday sipping Bourbon with smoothness and richness of taste. It has an outstanding balance of sweetness and subtle spice with brown sugar and vanilla on the nose and peaches, and toffee tastes with the delicate and warm honey finish. The Bourbon is 41.1% alcohol by volume. It is available at 750ml for $36.99.

Jefferson’s Reserve Single Barrel Very Old Kentucky Straight Bourbon Whiskey has a higher proof of 50% alcohol by volume. They released this to cater to the needs of people who love strong drinks with dense flavors. In addition, since the Bourbon is from a single barrel, it allows the flavors to be enhanced and gives a more robust feeling and experience to the drink. The flavor profile of the single barrel bourbon includes a fried apple pie aroma with cinnamon toast, brown sugar, a coffee palette, and a long finish with a hint of spice. It is available in limited amounts at 750 ml for $55.

Jefferson’s Ocean Cask Strength Bourbon is a blend of straight bourbon whiskey, which has 56% alcohol by volume. This limited-edition bottle has fully matured Kentucky bourbon, which was a blend from a barrel put on a ship to cross the equator four times, stopping at five different continents.

The aeration of the ocean and movement of the ship give this Bourbon a distinctive flavor. It has notes of salted caramel, figs, and chocolate fudge palette with powerful aromas of marshmallow, orange zest, and burnt sugar, and sweet mint finish. Unfortunately, they made only 600 bottles priced at $85 for 750ml.

The specialty of Jefferson’s Oak Very Old Kentucky Bourbon is the custom barrel, which is designed in a wave shape to create an innovative and unique environment for the bourbon whiskey. The whisky fully matures in the barrel, which gives it an extraordinary finish to the drink.

The toasted and flash-charred oak barrels give the whisky more space and surface area to come in contact with the oak. As a result, the Bourbon is smooth and well-balanced, which is seasoned perfectly as the double-barrelled whisky. It has 45.1% alcohol by volume.

The Jefferson’s twin oak, ancient and very rare custom barrel bourbon has a woody aroma with hints of vanilla and butterscotch and sweet wood, apple, and roasted almonds palette. The drink gives a medium-length finish with lingering spice notes. It’s worth $99.99.

This is a limited-edition Jefferson’s Chef’s Collaboration Bourbon, which is a blend of Bourbon and rye with intense fruit flavors and spices. The blended straight whiskies limited-edition has 45% alcohol by volume.

The head chef of Jefferson’s, Edward Lee, and Owner Trey, wanted to bring in a new flavor to the Bourbon after getting inspired over a meal of Korean fried chicken paired with Bourbon. So instead of mixing Bourbon with spices, they mixed Bourbon with rye to give an extraordinary fruit flavor and spice to the drink, which matches with the big spicy food.

The drink has an extraordinary fruity flavor of peach and rye on the tongue, with oak and cherry aromas and a warm, immediate finish with a spicy rye aftertaste. It’s worth $58.99.

Jefferson’s Reserve has different flavors of Bourbon which are available in various sizes and prices including,

Jefferson’s Reserve Very Old Kentucky Straight Bourbon Whiskey is the perfect example of blending different batches of mature Bourbon to create a master bourbon with incredible flavors. It has a bold and smooth taste which makes it a truly quintessential bourbon to enjoy for the whiskey novice.

The robust bourbon whiskey has caramel toffee and cinnamon flavor with honey and nutmeg aromas. The drink gives a smooth leather finish with tobacco notes. It is 45.1% alcohol by volume.

Jefferson’s Ocean, aged at sea, is a blend of straight bourbon whiskey, which has 45% alcohol by volume. They age the Bourbon in the ocean, where it takes an exemplified voyage of 25 ports, five continents and crosses the equator twice. The rough climatic conditions of the sea with the barrels on the deck of a ship give an extraordinary flavor profile to this drink.

The constant movement of the ship, humidity, and dense sea breeze gives it a savory briny character and natural sugars drawn from the barrel’s oak. The Bourbon has a strong flavor of salted caramel popcorn and tropical fruit on the nose and palate with a warm viscous finish.

Trey Zoeller and his father found Jefferson’s Reserve in 1997. Their family name on the company honors their founding father, Thomas Jefferson, the 3rd President of the United States. The distillery is in Kentucky, which is one of the bourbon capitals of the world.

The company continues to experiment in different aging and maturation processes but does not distill its own Bourbon. Castle Brands purchased the company in 2000 and was later acquired by the French alcoholic beverage giant Pernod Ricard in 2019.

The History behind Jefferson’s Reserve Bourbon

Trey and his father had an amazing stock of whisky in 1997, which was the original Reserve version of the Bourbon. It was a 15-years aged one blended with other Bourbon bought from four more distilleries in Kentucky.

Jefferson’s Reserve Kentucky Straight Bourbon whiskey is made from corn and aged in new charred oak barrels for a period of roughly four years. Then, they blended the Bourbon from different manufacturers to bottle the actual Bourbon. Finally, they bottled the Jefferson’s Reserve bourbon in a very elegant flask-shaped bottle with a wooden cork that gives it a classic appearance.

Why is Jefferson’s Reserve Bourbon So Popular?

Kentucky is famous for Bourbon, as it is one of the key places where plenty of distilleries manufacture and produce high-quality Bourbon. Jefferson’s Reserve is a Kentucky-based company that offers fine quality bourbon to its loyal fans. Unlike many popular brands, which distill their products,

Jefferson’s Reserve takes pride in blending the original Bourbon with different manufacturers to create a specialized bourbon that suits many alcohol lovers’ palettes. It is cost-effective and tasty, which makes it more popular among the new bourbon drinkers.

Jefferson’s Reserve bourbon is a blend of different spirits, which gives it a unique taste. Here is a simple guide to enjoying its flavors to the fullest,

The dark and richer quality of the Bourbon is best enjoyed neat at room temperature with no water or mixtures. Pour a shot of this Bourbon in a glass and swirl it to smell the caramel and vanilla tones and gently experience the charred oak wood flavor finish.

Enjoy Jefferson’s Reserve bourbon by adding in a bit of ice which knocks out the darker aspects of the drink and enhances the light of flavor of the Bourbon. If you prefer Bourbon on the rocks, you can enjoy the brown sugar and vanilla tones of this Bourbon by sipping it chilled.

Out of many popular cocktails, Jefferson’s Reserve bourbon works great in an old-fashioned manner. The bitters enhance the brown sugar aspects of the Bourbon, which gives it a rich cocktail taste.

Ginger beer goes perfectly with the sharp flavor of the Jefferson’s Reserve bourbon. Mix ginger beer with Bourbon and enjoy the velvety finish to the drink.