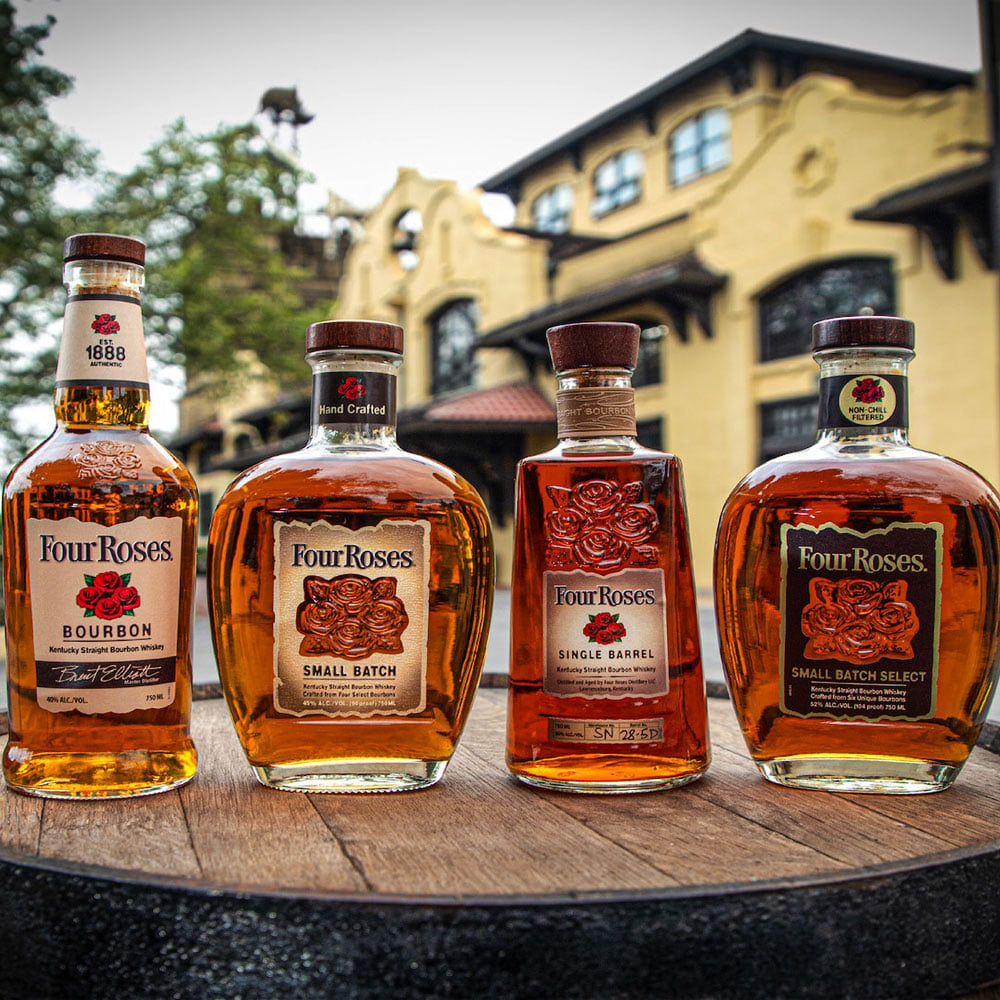 This guide will help give you an overview of what Four Roses Bourbon has to offer.

Note: the prices are in US Dollars, and for the US market, if you are outside of the US, the prices may vary, we will, however, include links to the best place to buy your ideal bottle of Four Roses Bourbon in your country.

How much is a bottle of Four Roses Bourbon?

The most commonly bought bottle of Four Roses Bourbon is the Four Roses Kentucky Straight Bourbon Whiskey 750 ml and costs $23.99.

What is the most expensive bottle of Four Roses Bourbon?

Now that you have the simplest answers to the simplest questions, below you’ll find the prices and sizes of the entire range of Four Roses Bourbon, their sizes, prices, and later on, a buyer’s guide.

Here is the list of Four Roses Bourbon bottles and prices.

Amongst these standard Four Roses Bourbon bottles, the following is the most popular one,

They age the bourbon in oak barrels at particular room temperature for a minimum of 5 years and are bottled at 80-proof. It has a dark amber color with a smooth and long soft finish. The bourbon has floral and fruity aromas with hints of pear and apple on the palate.

The 2021 Limited Edition Four Roses Small Batch Kentucky Straight Bourbon Whiskey is a higher-proof Bourbon with distinct flavors and character. They made it using two types of corn mash bills and four types of yeast, which are between 14- and 16-year-old. They age the bourbon for a minimum of 12 to 16 years, then non-chill filter and bottle at 114.2 proof.

This drink has ripe berries and a floral aroma with plum, orange peel, and delicate spice palate, giving a creamy finish with hints of dark chocolate and vanilla. It’s worth $150.

They released the Four Roses Small Batch Limited Edition Kentucky Straight Bourbon Whiskey 2018 to commemorate the 130th anniversary of the Four Roses brand. It has 54.2% alcohol by volume. They awarded this bourbon with the ‘World’s Best Bourbon’ and ‘Best Kentucky Bourbon’ awards at the 2019 Whisky Magazine World Whiskies Awards.

They made the bourbon using two mash bills and four types of yeast strains, which have delicate fruit, caramel, and baking spice characteristics. It is aged for a minimum of 10 to 16 years, which is non-chill filtered and bottled at 108.3 proof.

The bourbon has a deep amber color with warm aromas of crème brûlée and dried berries and a bright palette with hints of mint, cinnamon apple, and apricot. It gives a long finish with hints of vanilla and cinnamon. It’s worth $671.

Four Roses brand has introduced plenty of limited-edition bottles from time to time, where the master distiller selects a few exceptional barrels to be introduced to the public. Among the limited-edition bottles include the Le Small Batch, released in 2020, 2019, 2017, and 2016. In addition, they also released a 2017 50th Anniversary Al Young Limited Edition Small Batch Bourbon bottle and a 2016 Elliott’s Select Limited Edition Bourbon bottle.

Four Roses brand has different flavors of bourbon, which are available in various sizes and prices including,

The Four Roses Perfectly Balanced Small Batch Bourbon is a blend of four different bourbons to create a sophisticated bourbon. This is the idea of the master distiller who picks four original Bourbon recipes at the peak of maturation to create the perfectly balanced Bourbon. It has 45% alcohol by volume.

The master distiller picks four significant yeast strains to ferment this mash, which is rich in flavors of rye, baking spice, rich fruit, and vanilla. After fermentation, they are distilled through column distillation and aged for a minimum of 6 to 7 years in the Kentucky warehouse. Finally, they are bottled at 90-proof.

This bourbon has a mellow spice aroma with hints of sweet oak caramel and rich fruit. Its palette includes ripened red berries, a dried spice that gives a smooth finish.

This hand-picked Four Roses Single Barrel Kentucky Straight Bourbon Whiskey is a complex, smooth bourbon with a premium taste and a long finish. It has 55% of alcohol by volume.

They age it for a minimum of 7-9 years in a single barrel, making it a high-quality bourbon. The drink has a dried spice, vanilla, and maple syrup aroma with hints of ripe plum and cherry taste that give the drink a smooth and delicately long finish.

They craft this unique batch using six unique bourbons and bottled at 104-proof. The master distiller selected six types of bourbon recipes aged for a minimum of 6 years to handcraft this small-batch select bourbon.

The yeast strains have distinct flavors of delicate fruit, rye, baking spice, mint, caramel, and herbs. This unique combination of yeast strains used for the fermentation of the mash bill gives it a bold flavor. They age the bourbon for a minimum of 6 to 7 years that has 52% alcohol by volume.

This bourbon has powerful aromas of clove and raspberries with berries, vanilla, apricot, and a light oak palette. The drink gives a lingering spearmint finish with a light touch of cinnamon.

The History behind Four Roses Bourbon

Four Roses brand is the passionate adventure of Paul Jones, who named the bourbon after his passion for his beloved belle, who wore a corsage of roses on her gown when he initially proposed to her. This Four Roses became the symbol for his bourbon, where he started making high-quality bourbon by purchasing Frankfort Distillery in 1922.

Four Roses brand was the top-selling bourbon company in the United States till 1950, where it was operated by Seagram, who purchased the Frankfort distilling company in 1943. But unfortunately, Seagram discontinued the production of Bourbon in the United States and joined the European and Asian markets, where it became the top-selling bourbon in Japan and Europe.

Jim Rutledge, the legendary master distiller, joined the corporate office in New York in 1992, where he returned to Kentucky to help with the Four Roses brand. It was through his constant efforts Four Roses Bourbon brand became a trademark in the United States again.

Why is Four Roses Bourbon So Popular?

Four Roses is a brand of Kentucky Straight Bourbon Whiskey which has been produced since the 18th century in the United States. It is one of the top premium bourbon brands in the world, which uses a unique system of fermenting the grains with different yeast strains that gives it a distinct flavor and characteristics to the bourbon. This is a legacy bourbon that remains to be the top seller to date.

Four Roses Bourbon is a perfect drink to enjoy in various ways such as,

Four Roses Bourbon makes a great nice straight whiskey. You can enjoy this drink at room temperature without adding water or any mixtures. The 80-proof Bourbon is versatile and acts as an excellent sipper.

Four Roses Small Batch Bourbon and even Single Barrel Bourbon taste great on the rocks. Add a few pieces of ice cubes to your drink and enjoy chilled.

Four Roses Bourbon has intense floral and fruity tones, which get enhanced when you add a splash of water.

You can mix Four Roses Bourbon with sparkling water or soda water and enjoy the intense flavors.

Four Roses Bourbon acts as an excellent base for high-end cocktails such as Manhattan, old-fashioned, and mule. The bitters complement the sweetness and floral notes of the bourbon, which gives depth to the drink.