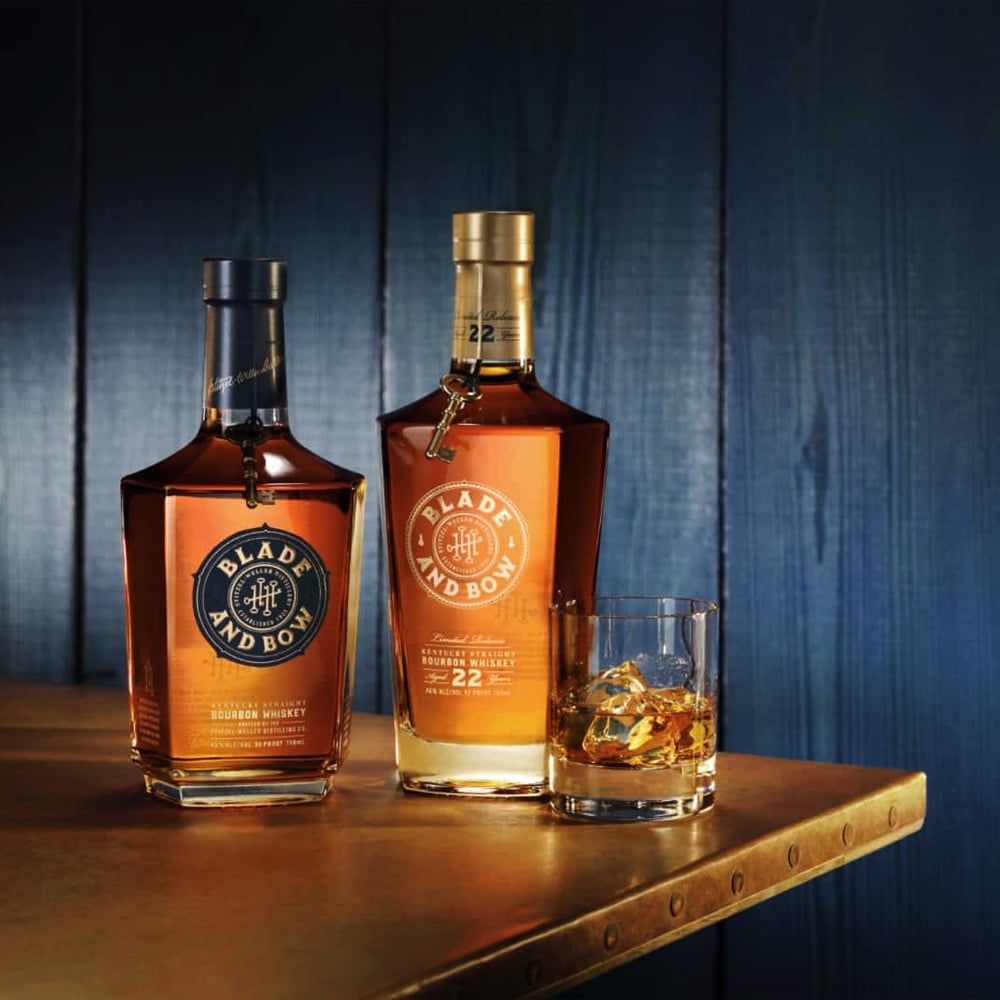 This guide will help give you an overview of what Blade and Bow Bourbon has to offer.

Note: the prices are in US Dollars, and for the US market, if you are outside of the US, the prices may vary, we will, however, include links to the best place to buy your ideal bottle of Blade and Bow Bourbon in your country.

How much is a bottle of Blade and Bow Bourbon?

The most commonly bought bottle of Blade and Bow Bourbon is theBlade and Bow Kentucky Straight Bourbon Whiskey 750 ml and costs $50.

What is the most expensive bottle of Blade and Bow Bourbon?

The most expensive bottle of Blade and Bow Bourbon is Blade and Bow 22-Year-Old Kentucky Straight Bourbon Whiskey. It costs $499.

Now that you have the simplest answers to the simplest questions, below you’ll find the prices and sizes of the entire range of Blade and Bow Bourbon, their sizes, prices, and later on, a buyer’s guide.

Here is the list of Blade and Bow Bourbon bottles and prices.

This is one of the legendary whiskies that pays homage to the Stitzel-Weller distillery. Blade and Bow Bourbon distillery uses a unique solera system aging process. They mix the aged whisky from the barrel with other fine whiskies from different distilleries to produce a fine quality straight bourbon. This bourbon ages in new charred American white oak barrels, giving the drink a great aroma and character profile.

The flavor notes of the bourbon include hints of sweet roasted grain, dried apricot, and ripe pear on the palate. It gives a smooth finish with warm notes of charred oak and winter spices. It is 46% alcohol by volume, which is packed the bourbon at the Stitzel-Weller distillery.

They have awarded this bourbon a gold medal at the 2015 San Francisco World Spirits Competition. It costs $50 for 750 ml.

The following is the list of Blade and Bow Bourbon limited-edition bottles and their prices (750ml),

This is a 22-year-old Kentucky Straight Bourbon whiskey that was released as a limited edition. They aged this Bourbon for over 22 years, following the passion and craftsmanship of the Stitzel-Weller distillery. They bottled this drink at 92-proof at this distillery, which gives it a unique flavor profile.

The 22-year-old bourbon whiskey has a toasted oak aroma with a touch of caramel, fig, and vanilla bean. It has a taste of torched sugar and apples baked with honey and spices. Since they have aged it for over 22 years, it has a deep red color and fruity tones with sweeter elements.

They have awarded this limited edition with a double gold medal at the 2015 San Francisco World Spirits Competition. It costs $499 for 750 ml.

About Blade and Bow Bourbon

The Blade and Bow brand began at the Stitzel-Weller distillery in 1935, which was an iconic location in Louisville and the home to the fathers of Bourbon. They named the brand after two pieces of a skeleton key: The Blade Shaft and the Ornate Bow.

The History behind Blade and Bow Bourbon

Kentucky has been home to several distilleries over the years, and one such is the famed Stitzel-Weller distillery, where the most popular Pappy Van Winkle Bourbon was produced till it was closed in 1992.

Pappy Van Winkle continued to run the distillery until 1965, where the American whiskey market slowly crashed when many people started liking vodka than whiskey. This made the Van Winkle family sell the company to a large distilled spirit company, Diageo.

Blade and Bow Bourbon resurrected the facility by producing fine quality bourbon with a touch of Stitzel-Weller heritage. The distilling operation remains the same as Stitzel-Weller distilleries, where five key components are involved, such as grains, yeast, fermentation, distilling, and aging.

It is one of the first ones to use the solera method of production to produce mass bourbon. Whisky is placed in a single barrel, aged for a few years, and the whole contents of the barrel are bottled. Whereas, in the solera method, they remove only a portion of the whisky for bottling and refill the barrel with fresh spirit and continue to age.

Blade and Bow Bourbon makers have the last few barrels of Stitzel-Weller whisky mixed with a blend of whiskies from other distilleries to make up the removed volume and continue to age in the same barrels. This process gives the whisky the same consistency and flavor profile as that of the Stitzel-Weller distillery.

The bourbon packaging includes a tribute to the five keys of crafting bourbon that was first made famous at Stitzel-Weller distillery. The geometric bottle has one side bearing the Blade and Bow logo, while the other five represent each of the keys to the bourbon.

Why is Blade and Bow Bourbon So Popular?

The well-known heritage of Stitzel-Weller distillery gives this brand a unique fan following among alcohol lovers. In addition, this blended bourbon gives the same taste and profile as the most famous Bourbon Kentucky whiskies.

The bourbon is packed in a six-sided flat bottle with a wooden cork stopper where you can find a key pendant dangling from the bottle’s neck. This key gives a unique attraction to the buyers, which have now become collectible.

How Best to Drink Blade and Bow Bourbon?

You can enjoy the blade and bow bourbon in plenty of ways, such as,

The dark amber bourbon has pleasant brown sugar and vanilla tones, which tastes best at room temperature. The flavor develops as you drink the bourbon and gives a peppery finish with a little charred oak and peach fruitiness on the tongue.

This is one of the most popular methods of drinking Blade and Bow Bourbon, as it gives a wonderful feeling and flavor to the drink. When you add a few ice cubes and a slice of lemon to the drink, the flavor profile expands, which makes it delicious. You can get in touch with the strong charred oak flavor along with the brown sugar and peach fruit tones.

The richer and darker flavors of fruit mix with the bitters to produce a delicious old-fashioned cocktail. The depth and complexity of the bourbon expands, which highlights the brightness of brown sugar, vanilla, and peach fruit in the drink when you mix it with bitters.

Ginger beer blends well with bourbon to give a unique flavor and texture to the mule cocktail. The bitter ginger mixes with the brown sugar and vanilla aspects of the bourbon to give a rich taste to the drink. The black pepper finish kicks in at the end gives a surprise twist to the flavor profile of this bourbon.